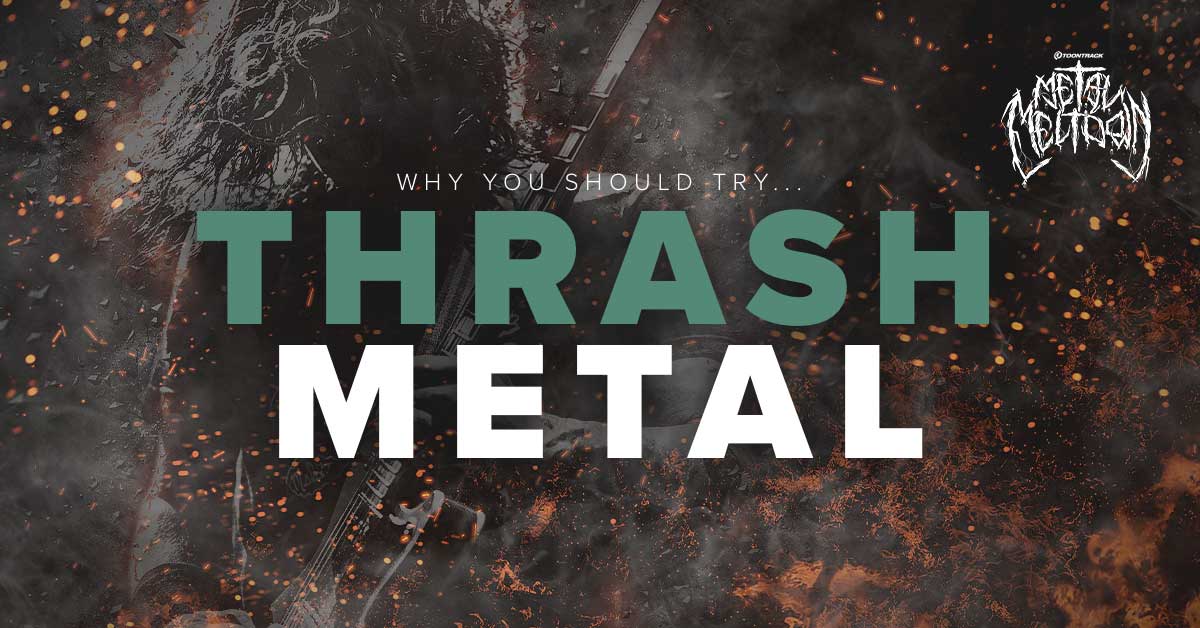 It’s week two of the Metal Meltdown. Four weeks of free metal tracks, all produced with the help of Toontrack. Each week sees us tap into a different style of metal, and now it’s time for thrash.

It’s a genre that has seen some of the best songwriters and players call it their home and arguably paved the way for the majority of modern metal bands.

But while it may have a dedicated following, for some it may all be new, so let’s dig into the what’s what of thrash metal.

Fast tempos, metal grooves and lead guitar where pretty much anything goes.

In the early underground days of thrash metal, bands such as Metallica, Exodus and Slayer looked to the UK and the New Wave of British Heavy Metal (NWOBHM) and combined it with their more American styles. Speed metal met Queen, punk met Sabbath and the rest is history.

As the ‘big four’ of Metallica, Slayer, Anthrax and Megadeth started selling out huge tours and releasing best-selling albums, thrash was out in the open and here to stay.

It's super fast, and fun to play, and when soloing, there are hardly any rules to follow, never mind ones to break. Chromatics are the name of the game and wah and whammy is pretty much mandatory.

Are there any JTC releases to help me with the style?

Speed is the name of the game so Igor Paspalj’s Speed Picking Masterclass is a must.

Though based in a world of prog and with a more melodic bent, Connor Kaminski’s Whammy Masterclass is a great starting point before you go big on the dive bombs.

The guitarist of Megadeth is a pretty good place to look too. Kiko Loureiro's Supersonic Sessions might not be all out thrash, but it’s unsurprisingly fast and that’s exactly what we're after.

Which guitarists should I check out?

James Hetfield
Papa Het! If you’ve written ‘Master of Puppets’, ‘One’, ‘Enter Sandman’, ‘Dyers Eve’ and [insert another Metallica banger from the endless list of bangers here] you probably know a thing or two about songwriting. His down-picking abilities are also revered and he can also play a solo or two from time to time as well. The old round thrash mega-package.

Dave Mustaine
Replaced by the equally mighty Kirk Hammet as lead guitarist in Metallica, way back in 1983. He then went on to form Megadeth and forged a name for himself as a player of incredible technical skill and flair.

Jeff Hanneman
The founding member of Slayer and the writer behind ‘Raining Blood’, a classic of any style of metal, let alone thrash. Going toe to toe with the menacing Kerry King, and with an ability to play at blistering tempos, he was just a pillar of thrash that all players should know about.

Can I get a playlist?

YES! Here’s some thrash, new and old. As always, make sure you do your own research.