Get to Know: Nazim Kri 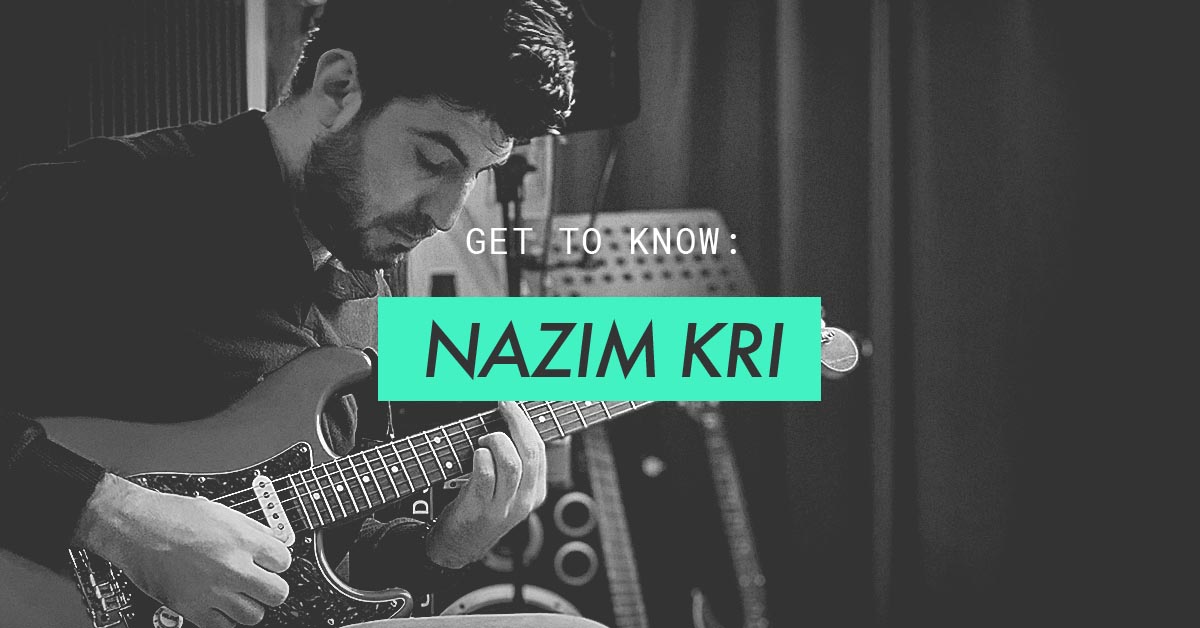 JTC’s reach is worldwide. We have customers from every corner of the globe, our Jam of the Month sees people from all walks of life getting involved, and our roster is an ever growing place of killer talent.

And with Nazim Kri’s JTC debut, we now cover every continent on earth bar Antarctica.

So let’s see what he’s all about.

How much pride is there in being JTC’s first African player?

So happy and proud! I remember like yesterday, in 2009/2010 when I started playing guitar, watching Blues Jam Tracks/Jam Track Central on YouTube. it was new, and crazy; showcasing people like Alex Hutchings or Guthrie.

I was telling myself that I’ll never reach half of this level. So when I received the email from JTC saying that I was picked, it was like a dream come true.

Algeria is a country with a lot of guitar players, with a deep passion for instruments, gear, and “guitar music”. Obviously a lot are big fans of guitar heroes from the late 80’s and 90’s, people like Satriani, Steve Vai etc. But they are also following the new wave with Martin Miller, Marco Sfogli or Mark Lettieri.

But the main thing is that the guitar is having an important place in the Algerian music with styles like Rai, alaoui, African or Algerian pop.

So a session guitarist will be able to play on many configurations also rhythmically and technically. Like 9 out of 10 bands have got guitar in their line up.

The main goal here for a guitarist is to get out of the box from that “rhythmic static” playing, so instead of playing simple “boring” chords, you try new things. New sounds, like clean delays (U2 style), lead solos with some Algerian traditional licks. Riffs inspired from prog rock...Algerian music is very open and challenging!

It started between 2005 and 2010, there were a lot of great players who gained maturity and started to show off in pop bands (myself included). And in summer 2012 the first national Guitar Day event was organised to invite the players and bands on stage and showcase their passion for guitar.

So since that time, a lot of players came alive and gained maturity. People like Nazim Mohammedi, Wassim Rahmani, Nazim Bakour, or recently Soumia Ghechami. They are always posting good content and improving.

The sad thing is that our country is not supportive of the music industry. So it’s hard to get a working visa for musicians and be able to tour easily; hard and expensive to get gear; and super rare to organise workshops, Masterclasses or showrooms about guitar. Even if you’re endorsed by a premium gear brand, it would be hard for their instruments to be sold here because of the poor currency.

But we are hopeful to see something like a NAMM Show here in Algeria! I’m sure a lot of people will come!

Out of all the backings we sent over, what clicked the most with these?

Being a big blues rock fan I think the backing track that inspired me the most is “Put it All Out There”. I'm a big west coast shuffle fan, a huge fan of Bernard Purdie, Jeff Porcaro who played rhythm so perfectly, and guitar players like Larry Carlton or Robben Ford. So that track was pretty amazing to play on. I can also say the Reloader track was as good too.

What is the biggest takeaway for you with this release?

I think the versatility of the licks is the main thing. These 20 licks are usable in many styles and it will sound “natural”. I was thinking about creating a pack based on “universal” playing” and I got inspired by players who don't shred systematically but they have that one thing that’s going to make you feel an emotion. I can talk about Mark Lettieri who is for me one of the greatests players nowadays. His approach is always to play that note to surprise you, with that bend accuracy, choosing always the right timing or groove, and in any style.

So in my release I tried to reach that kind of energy. How to say a lot of things in a simple way; to attract the ear and at the same time to create something meaningful on the track.

Who is your favourite JTC artist?

I think like 99.99% of people say Guthrie. For sure he’s the most popular JTC artist and also my favourite.. His playing is just crazy and perfect! I remember watching the “Orange Jam” and literally showing it to every guitarist I knew, and I would say, “No way this guy is human.”

Who has been your biggest influence?

Hard question because I can't really choose one player only, so I always answer by 3 essential guys! The first was Mark Knopfler, because Sultans of Swing was the song that made me start playing guitar. I’ve been listening to Dire Straits since I was young but at the age of 16 I really wanted to learn that tune. So I chose Mark Knopfler for the lyrical and smooth touch in his music.

The second is for sure Steve Lukather. I took his philosophy in session playing, like all the rhythmic stuff, how he plays the riffs, even the solos. I tried that way of thinking in Algerian music and it worked so well. Steve has the best guitar sound I’ve ever heard.

The Last is Bireli Lagrene. Absolutely unique! He took the manouche style to another level. And he played with some of the greatest jazz composers and musicians, like Jaco Pastorius, Dennis Chambers and more. Bireli is unpredictable, you can watch 100 videos of him and you’ll always be surprised. His albums are a “must have” for a guitarist or jazz music fan.

I really want to make people understand the Inside of session playing. I have done it for 10 years here in Algeria, in various styles and various band configurations. So I would like to show how you can think as a guitarist in the studio or live. How you can play on a ballad, on an electro dance song, a pop song or on a rock song, and also on a RAI song too.

So a complete method to master session playing; I was mainly inspired by people like Michael Landau, Paul Jackson Jr or recently Pete Thorn. I really think that playing on a backing track is not sufficient, guitar is an instrument that can do many things, so for me as a guitarist I have to be able to solo over chord changes, and at the same time to play any simple pop song and still sound great on it.

Watch Nazim in action as he takes on "Reloaded" as part of the pack.