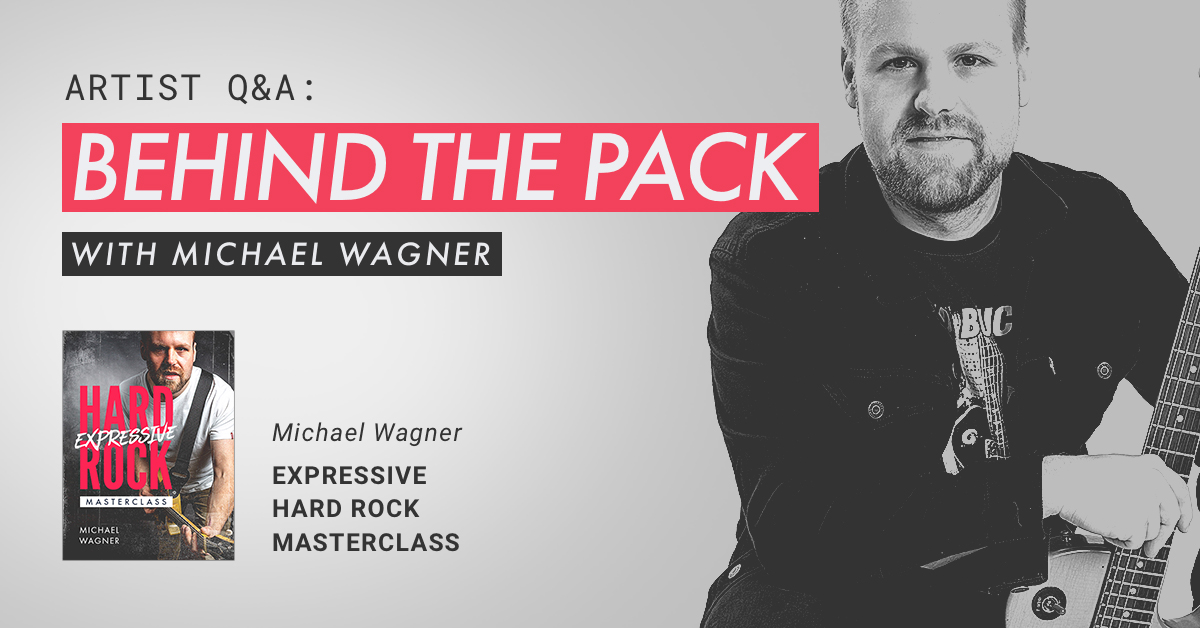 Sometimes, all you want to do is rock. One man who is clearly a master of that, is JTC’s Michael Wagner. If you need a bit of help learning just how to rock, then we suggest you take a look at his brand new Expressive Hard Rock Masterclass.

Q: What was the inspiration behind this Masterclass?

My biggest hero when I started out playing was AC/DC's Angus Young. He represented everything I think is so cool about the electric guitar; the loudness, the danger, the viciousness. I stole everything I could from him and soon after I started my own hard rock band. My solo stuff for JTC however was always more on the bluesy side of things. So doing a rock oriented package was kind of overdue, because it represents so much of my own history as a guitarist. A cranked up Marshall and an old Les Paul – that’s really what it’s all about, isn’t it? Having played this music for so long, I really felt I could teach other people a few tricks about it.

Q:  What’s your favourite part of it?

I’m pretty happy how “Finger in the Socket“ turned out composition-wise! It has that classic 70s rock ‘n’ roll vibe, but I think I managed to put in some of my signature licks and chord changes so it doesn’t sound too much like a rip-off of any of my favorite bands of that era.

But self-praise is no recommendation, so I just want people to experience the full package themselves and hopefully they can learn something for their own playing. That’s the most important thing for me with all of these JTC packs; to inspire people to get creative. Of course, it’s flattering when I see others on YouTube playing my tracks note for note, but what I really hope to achieve is that people do their own thing with it!

Q: How does the future of rock ‘n’ roll look to you?

Today, guitar-oriented rock music is a niche, but amazing things happen regardless. Despite me being more of a classic rock and blues player, I love the modern rock guitarists like Polyphia’s Tim Henson or Plini Roessler-Holgate. Their sense of melody and composition is so different from classic rock, but that’s exactly what makes it so interesting. It’s always hard to teach an old horse new tricks, but I’m definitely planning on stealing more of their stuff and let it find its way into my style. Having players like them, I think there’s no reason to worry about the future of rock’n’roll. Maybe it’s even gonna find its way back into the mainstream – you never know!

Q:  And apart from rock, what else do you really like to play?

In essence, I’m a blues player with a strong attack and a love of hi gain lead sounds – and the great thing about blues is, you can translate it into pretty much any style. I’m a total groove addict, so I love playing funk. I also love good pop songs, so I’m totally happy with just laying out some chords for a great singer as well. I really enjoy playing any style I’m capable of. The only thing that matters to me is good songs!

Q: What’s next for you at JTC?

In general, JTC for me is an artistic outlet first and foremost. It’s an awesome way to show my own instrumental music to a broader audience. So for me it all comes down to having the next good idea for an instrumental tune. I don’t want to put out new video packages just for the sake of it, but whenever I got some quality material you can be sure there’s gonna be a JTC release!