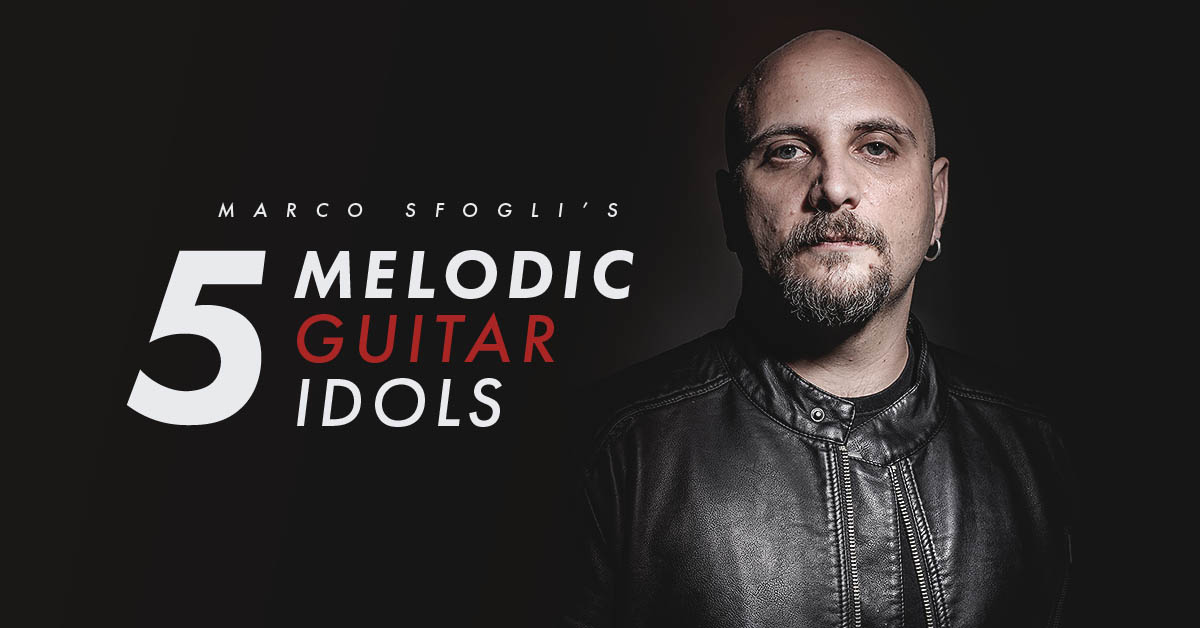 Marco Sfogli knows a thing or two about melody. His first ever Masterclass proves that in spades!

But even the greats have heroes, and we wanted to see who made Marco the melodic monster he is today.

So in no particular order...

Around 1988 when Europe’s Out of This Worldcame out, it was one of those records on heavy rotation on my cassette walkman!

Love his melodic approach, his rhythmic sensibility and everything in between. He’s really one of those few players that can turn a solo into a song within a song. I picked up so much by just listening to him on records.

Anything from Out of This World, if I had to pick one it would be the solo from “More Than Meets The Eye”. Brilliant choice of notes!

I actually discovered Toto quite late. A friend of mine lent me a cassette, it was their Greatest Hits record. I instantly became a fan, then I got my head around pretty much all the work Steve has done as a session player and the quantity and quality of stuff is just unreachable for anyone.

It’s one of those bands that you gotta love. Dedication, musicianship, great arrangements, great guitar solos. Plus they probably are found on most records as session players than anyone else on the earth.

My favourite record is “Kingdom of Desire”, the last one with the great Jeff Porcaro on drums. I just happen to love the vibe of this one, there are solid rock songs as well as great instrumental sections and beautiful ballads. And Steve is a hell of a singer too!

I got into Van Halen when Michael Jackson’s “Beat It” came out on the radio. But it was 5150, the record, that turned me on how great this band was. Eddie could make sounds out of his guitars like aliens screaming, plus they had great mellow moments. You can’t be a modern player if you didn’t like Van Halen!

Because Eddie was the man back then, he was the pioneer, the ultimate axeman, the guy with a smile on his face. He could make everything he played look effortless and sound super smooth. Definitely the best rock guy of our era!

Personally, “5150” the track is one of my favourites. It’s probably the very first riff I ever learned on a guitar so there’s a bit of nostalgia involved here

Dream Theater was the turning point band for me (and I’m sure for a lot of players of my age). The shred era was going downhill and all of a sudden you hear this band doing impossible things, playing long odd rhythm sections and flashy and tasty solos. It was during the grunge explosion so it was as weird as highly welcomed.

It was the band and specifically the player that shaped who I am today, playing wise and tone wise, no questions. They just happen to have all the ingredients I was looking for in a band. I’m glad they existed because I probably won’t be playing guitar today if it wasn’t for them.

“Learning to Live” is one of my favourite ever. Quite a long track, over 11 minutes, it has a lot of different moments. Definitely the pinnacle of their production and has one of the most lyrical solos ever.

I actually discovered Andy by accident. A friend of mine lent me a cassette of his band Danger Danger and I got into this beautiful playing, and later on got his first Ear X-Tacy CD and became a huge fan. What’s fun is that back then nobody knew him in my area, so it was my personal hidden nugget!

Andy is so different from the rest, he had something going that was just unique. A rock player with a jazz attitude, his note choice and use of outside playing on simple rock tunes was what impressed me by the first spin. On a personal level he’s also a super cool guy, love him to death!

One of my favourites ever is a track called “Happening ‘68” from his The Spoken and the Unspoken record. It just puts me in the right mood, it shows his huge Beatles influence and has an outro solo that just puts me on the floor every time.

Find out more about Marco's first ever Masterclass here!