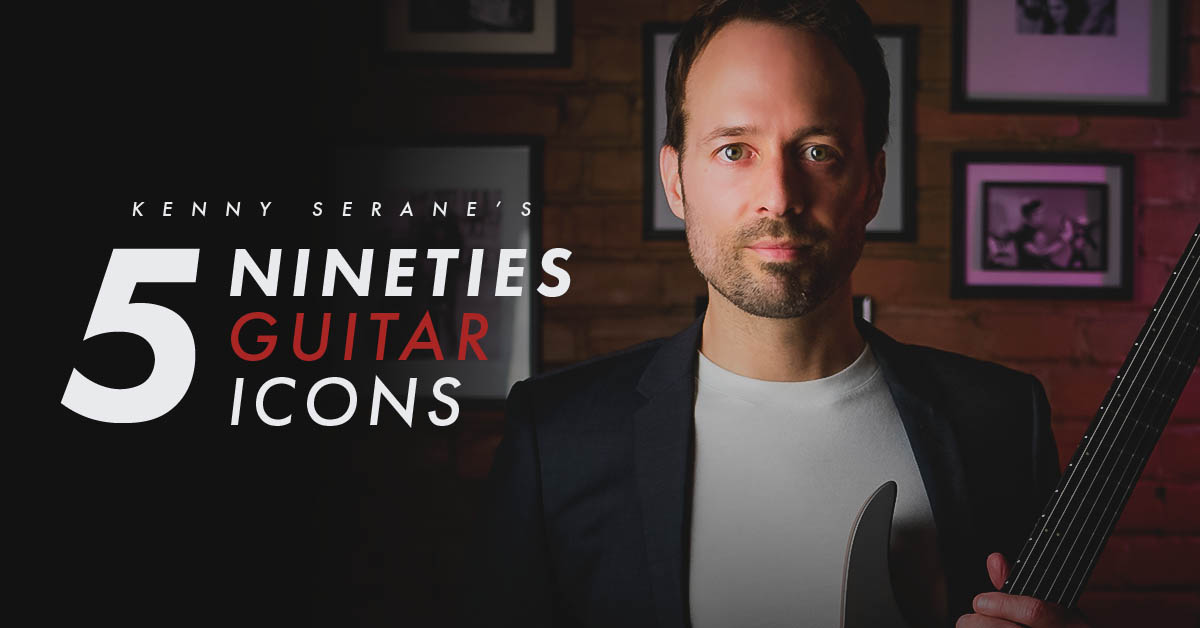 Every era of guitar can rightly put its hand up to being the best era, but for the here and now, this is all about the 90s.

Kenny Serane’s Classic Rock Soloing is a three track look at that monumental era of guitar, so it’s only right we gave him the chance to shed more light on the players that influenced him.

Satch is maybe the first one who led instrumental guitar to the top in the 90s. Catchy tunes, rock feeling. He succeeded in blending classic playing with a modern approach. Two handed tapping, legato, distinctive tone, there are too many things to talk about with his style!

He also helped me a lot to understand modes. The first time I heard lydian was certainly in Flying in a Blue Dream.

Too many, but I guess all Surfing with the Alien album songs are absolutely genius.

Technically first, his legato lines helped me to shred when I started playing guitar. Second is tone. I always loved his way of playing with distortion, feedback and more. I learned a lot tweaking my guitar presets along with a Satch album in my CD player!

I’m pretty sure he found all the best possible drop-D riffs! When I first listened to Rage Against the Machine's debut album, I was blown away; power, creativity, anger. every guitar part was a pure joy to play and still sound so cool today. I also can’t tell how many hours I spent with my whammy pedal and toggle switch to try to sound like him on the “Know Your Enemy intro.

The opening song “Bombtrack”, “Know Your Enemy” and “Take The Power Back”. Also, “Killing in the Name” is so fun to play live!

Tom has proven that a powerful riff can be made with a light crunch and neck pickup! He made me spend a lot on pedals too :)

One of the most gifted players of this era. His work alongside Marty Friedman on Cacophony and his solo album Perpetual Burn are absolutely phenomenal and still playing on my Mac today. If I’m asked for shred over the top and melodic playing, I definitively say his name. I was obviously in love with his sweeping parts blended with classical progressions. So young and gifted, and sadly cut short by A.L.S.

“Concerto” from the first Cacophony album is a real masterpiece. I also love the track “Go Off! Track” and “Mabel’s Fatal Fable” from his solo album.

Certainly on sweeping. Thanks to him I can play the sweep part of Fast Forward!

I also discovered japanese scales with him (or Marty Friedman, his mentor). It was a complete new path to explore for me.

I discovered Jan’s album Spirit after my teacher told me about him. I was impressed by his feedback control, killer tone and lyrical playing. His tremolo technique is very unique too.

“Road to Glory” gives me goosebumps each time I listen to it.

“Back in the Saddle” with its reggae feel.

“Angel” as my alarm clock during my teenage years!

In writing, he helped me to try new things, new instruments on my songs which were initially guitar oriented. For example, the “Migrant” (from Spirit) has a very video game mood with this intricate and beautiful key change along the song. I understood the importance of arrangement and to not focus on guitar only. That’s what we call music I guess.

I learned a diminished scale, thanks to him! Gambale was the first to bring me into jazz and fusion music. Stellar playing and ability to play over changes is out of this world. Even if orchestration is maybe out of date, it is a real gold mine for every guitar player, whatever the genre.

“Leave Ozone Alone” from Thunder From Down Under: complex tune with a rock touch.

“Lazy Passion” from A Present for the Future: there is a very melodic guitar solo across the modal progression.

All of the Coming to Your Senses album is a perfect starting point for rock players who don't know him yet.

A lot for improvisation and especially phrasing. He helped me to focus on my phrasing coherence, how to rest, how to play and more! I’d often spend 8 hours non stop on just one of his solos to “try” to understand his strategy.