Get to Know: Julian Eggenhofer 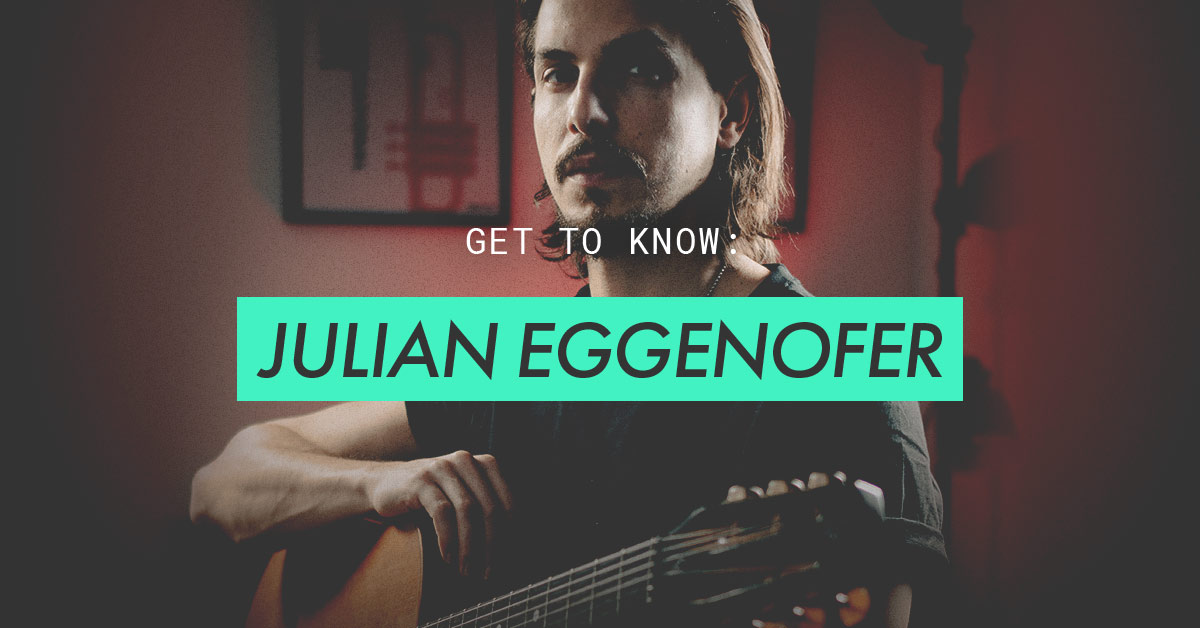 JTC’s bread and butter is electric guitar and shred, but if the playing is great, it simply doesn’t matter what or who it is.

A scroll on Instagram, a few messages between the team and it was decided; we had to work with Julian Eggenhofer.

So who is JTC’s 100th artist? And what makes his gypsy jazz brain tick?

Tell us a bit about your background and how you got into playing?

I started playing when I was about 15 years old. I’m 32 now, so it’s been a while. I found an old, dusty guitar from my mother back then and started playing things like “Eye Of The Tiger”, just using one string. I remember being terribly afraid of a string breaking. Had no clue how to change it nor did I know how to tune it so for almost a year I played totally out of tune and on such old strings.

After that time a very good friend of mine taught me a lot. He had already played for a few years and we both loved heavy metal music. So not long after we sat together and played Iron Maiden stuff on nylon guitars. Until today we still play together in different bands, it’s more about jazz instead of metal but we’ve got such a strong musical connection and it’s always something special to play with him. His Name is Julian Wohlmuth by the way!

What was the inspiration behind Rogue Mode?

Actually there is no great story behind that one. I wrote it during the first quarantine in 2020 when I was bored as fuck. A lot of the patterns I used for the theme, I often use during improvisations so It didn’t take much time to set everything together. Just needed some chords and the rest was pretty simple. In terms of harmony and the rhythmical structure of the melody, it is a pretty simple song. In fact it’s just about speed and muscle memory.

Do you have a favourite part of the song?

Phu, good question! Maybe the bridge, cause it actually got some melody? Haha.

You’ve been putting on singles, but will we ever see a full album?

Yes definitely! At first my plan was to wait with all the releases until I have a full album but nowadays it’s more about portioning your content over time so I decided to release a few singles and the full album will come afterwards.

What first attracted you to the style of gypsy jazz?

Actually my good friend Julian Wohlmuth asked me, I think it was summer 2012 or so, to play a gig with him. Once again he was already into gypsy jazz for a few years back then. I agreed and I learned a repertoire of about twenty tunes. My knowledge of music theory was pretty poor at the time, so I just played the pentatonic scale up and down. After that gig I really fell in love with the music. It’s like, once you are infected, you won’t ever stop again. For me this music is so honest and pure, mostly because it’s acoustic but there are no effects and stuff, it’s just you and your instrument. Love that.

What tips do you have for people approaching it for the first time?

Check my Class at JTC! Haha! No, jokes aside. I think the most important part at the beginning is to listen to the music as much as possible. Find a player or a band you really like and listen to it. Try to sing along so you get a feel for the rhythm, the phrasing and the general vibe of the music. Then try to copy the things you really like. I’ve never been a huge fan of transcribing whole solos or something. Pick out small phrases or licks and really try to understand what is going on theoretically. Then try to adapt these licks or ideas to other chord types for example, so you can use them whenever you’re feeling like so.

Learning this music has a great tradition in watching other players and using your ears so another tip would be, try to avoid using tabs or something and try to find other players to learn from.

Do you explore other styles of guitar?

I’ve always been a fan of metal and rock music but unfortunately I’m not really good at playing it. From time to time I give it a try but it’s more like a hobby.

Besides that I love to play blues, funk and some fusion stuff on my Strat cause as I’m sure you all know, there are times we all need these fancy sound pedals and all that stuff.

How does it feel to be the 100th artist on the JTC roster?

It’s just amazing to be part of this great community. I can not tell how happy I was when Dan reached out to me. JTC is such an amazing platform with such exceptional players, to be the 100th artist is a real honour. Working with you guys is so easy and enjoyable, I’m looking forward to many more releases.