How to choose guitar strings

Whether you’re new to the world of guitar or you’re that person who has owned a guitar for 10 years but never changed the strings, then you’re in the right place!

This is your chance to better understand the world of strings. The lingo, the variations and the maintenance of strings can be confusing no matter what level you’re playing at, so we’re here to give you a full rundown.

Let’s start with why they are so important.

What’s the deal with strings?

First, the basics. Strings are fixed at the machine heads on the headstock and the bridge towards the bottom of the body of the guitar. Fret wires at key intervals along the length of the neck then allow you to play different notes. These fret wires are normally straight, but modern variations include fanned fret and True Temperament™.

It is said by many that strings don’t have an impact on tone, and while the sound of the likes of Guthrie Govan and Brian May is unmistakable, even these greats of guitar will have a string preference. Brands, types and gauges of strings all help to create a different tone.

Note attack, sustain and decay are all aspects of how we summarise a string’s tone. The initial note volume and dynamic response of a string can be looked at too. Finally, the EQ profile of a string is tightly linked to the harmonics and overtones it produces.

But what causes these tonal differences in the first place?

Material is likely the most influential as it vastly affects the tone of the notes. Electric and acoustic strings generally have steel cores with varying materials for the windings. Steel and nickel are common electric guitar string materials, brass and bronze are common windings for acoustics, and nylon (sometimes animal gut) is almost exclusively used for classical guitars.

String gauge is the thickness of a guitar string and is measured in thousandths of an inch. Common string gauges for a standard 6 string guitar are; light (10-46), medium (11-49) and heavy (10-52). You can also get fancier with skinny top, heavy bottoms and custom gauges.

The first factor in determining your string gauge is the application. If you’re keeping things in standard tuning you have the most options but there are certain situations where you may require thicker strings. The odd drop-D tuning would likely work fine but if you’re down tuning everything to Drop-f# then light strings are going to first get very flappy, very fast and the pitch will be all over the place when you pick hard. A more appropriately thicker gauge string will solve this.

Other needs requiring different string gauges would be extended range guitars (think 7 or 8 string guitars) or funky scale lengths. Lastly, your hand/forearm strength and fingertip calluses can also dictate string gauge preferences because thicker strings hold more tension at the same pitch, so thicker strings can make string bends and vibrato more difficult. If you’re new to string bending, we advise picking light strings until you get the technique down, and then you can get all sadistic and bend 13s all day long like Stevie Ray Vaughan.

The strings are your direct connection to the instrument, so if you strongly dislike the feel of them you just won’t want to pick up that guitar again. Material, winding type and coating are the biggest contributors to how a string feels. Nylon strings feel slicker and smoother than heavy acoustic strings, while steel strings on an electric guitar might be considered a middle ground between the two.

Windings usually come in three main forms, round-wound, flat-wound and half-round, with round-wound being the most common. A typical downside to round-wounds is that they harbour dirt and grime. Companies such as Elixir Strings offer coated strings which improve the life of strings and ‘smooth’ out the feel a little. Flats generally feel smoother and have their own unique tone. 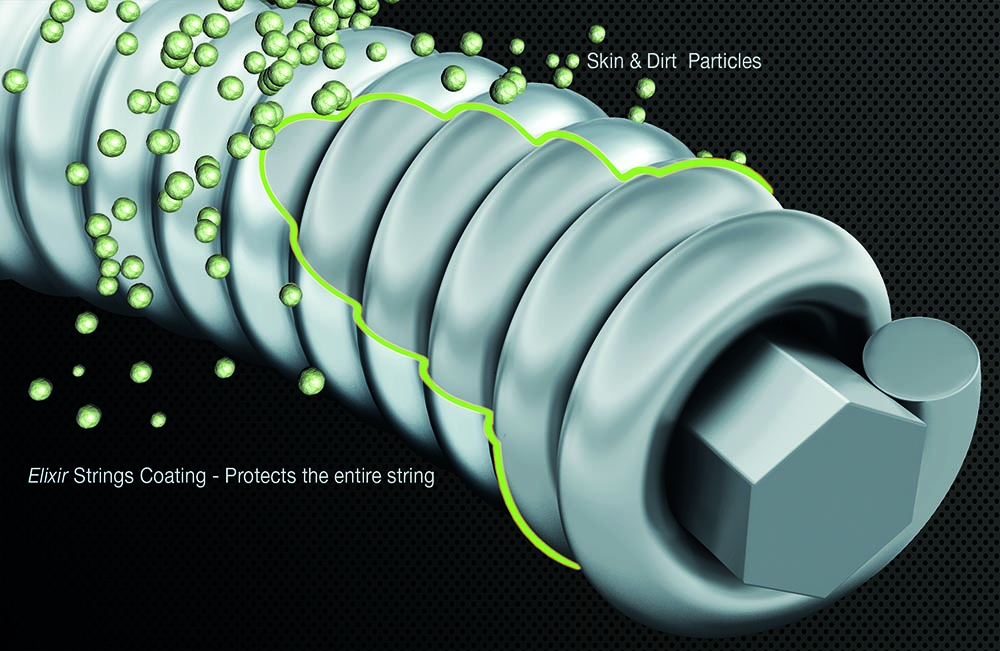 Notes from the JTC team

Steve
JTC artists rave about the Elixir Optiweb coated series so I gave them a go and they’ve quickly become my favourite strings to date. First and foremost it was the feel that attracted me. I’m most at home on roundwounds but the coating the Optiwebs have gives them an elegance and slickness I prefer, that makes playing feel more natural than other brands I’ve tried. Second, but equally as important for me is that the strings have a great balanced feel and really nice attack/clarity to the tone, without sacrificing the full body sound of the notes. Comfort and great tone make for a deadly combination.

Matt
When playing I like to use 10-52s. I play a lot of classic rock/ blues and instrumental stuff so sound is everything to me. I don’t use too many effects and like to keep things pretty raw so my string choice plays a big part to getting the most tone sustain as possible. I like to go heavy without stringing them with fencing wire! The light tops heavy bottoms never let me down. Whether I’m ripping a solo or laying down some sweet riffs they’ve got that perfect balance, but each to their own!

Dan
I go with a skinny top/heavy bottom pack whenever I restring. I down tune a lot and play a lot of chuggy, riffy stuff, so I like a good grip on the low end, but on those rare occasions where I do venture to the higher strings, the lighter gauge gives me a bit of a hand. I’m quite often guilty of playing strings to death so when I do change them, I’m always surprised at the freshness of the tone. Maybe there is a lesson there!