Get to Know: George Karayiannis 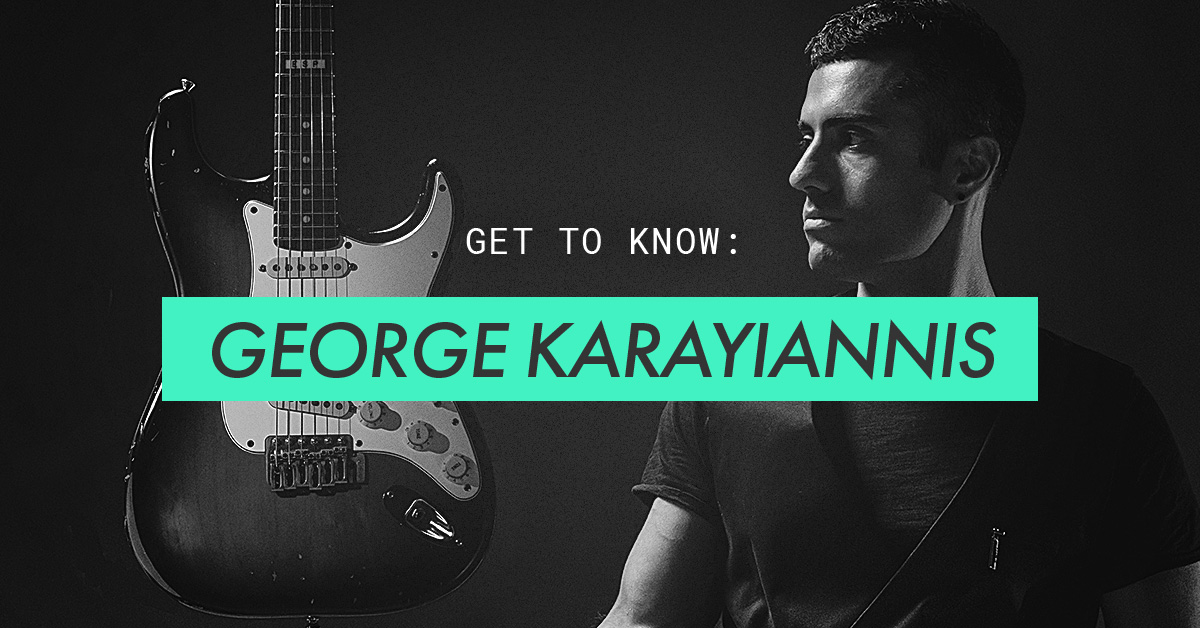 The JTC roster is built on the talents of incredible players from all around the world. So when one of those talents, George Marios, suggests another player to us, we’re happy to listen.

And so started our relationship with George Karayiannis! His JTC debut, Unravel the Pentatonic has been a big hit, but of course not everyone can know who everyone is, so we wanted to give George an opportunity to share a bit more about himself.

So what’s he all about?

So who is George Karayiannis?

I’m already questioning my existence enough so please don’t do this to me! Well, I’m a human from Greece, in progress since 1991.

I’m also a musician, guitar tutor, session guitar player and composer, with an intrinsic obsession to constantly try to explore the never-ending depths of music.

Finally I absolutely love working out, reading psychology and philosophy books, being close to nature, singing and my dog, Perla.

When did you first realise you wanted to be a musician?

It was December 2005 when I got my first guitar. She had 5 out of 6 tuners but this didn’t really bother me at the time. I spent the whole night dancing around with the guitar and acting as if I knew how to play over some Bon Jovi, Santana and Scorpions songs. I literally slept with the guitar on me. Haven’t thought about doing anything else since.

Who have been your biggest influences as a musician?

Of course there are many and they are really different but if I had to choose let’s say 3 of my biggest influences then with no particular order would be:

Joe Satriani
I remember watching him perform at G3 at Denver over and over again and thinking “That’s what I want to do!”. He was my idol during my first years of trying to figure out how to play.

Julian Lage
He is the reason I love jazz. His playing is so direct and mesmerizing that I just can’t get enough! I’ve seen Lage at a seminar here in Greece and when he was asked about the freedom he has on the guitar and how to achieve it, he said “Freedom is not a milestone, but a choice.”.These words really got stuck in my head since then and I tend to recall them most of the times when I write or play music.

Mike Shinoda
I know this might seem a little weird to some but this artist has always been an inspiration to me due to his creativity and involvement in so many different styles and aspects of music and art in general.

And any favourites on the JTC roster?

If I had to choose one I think I wouldn’t surprise anyone picking the Guitar God himself (a.k.a. Guthrie Govan).

That being said, the truth is I’ve learnt so much from studying the incredible releases of Luca Mantovanelli and Jake Willson, so let’s make it a top 3. Infinite respect to the whole team for creating such unique and helpful content for the ones who need it though.

How did the idea for the Masterclass come about?

I’ve always loved the sound of the pentatonic scale and I’ve always tried to figure out ways to use it in a more creative way. So I’ve gathered a lot of concepts, exercises and ideas on this journey that started to pop out in my playing. Then I realised that not many players use these concepts so it kinda was an obvious topic for my debut to me.

And what do you want people to get out of it?

As I say in the study guide, I really hope that it will truly unravel this beautiful polyfunctional scale and spark the creativity inside the ones who’ll study it.

Finally, since we’re talking about the most used scale, I hope it will plant the idea that there is no “box” in anything if you truly give your attention to it and look a little deeper, so that they can apply this idea to anything creatively.

Any plans for future releases?

Yes! I’m absolutely excited for the next one! I don’t want to share anything specific for now. I’ll just say it’s gonna be a Masterclass about a fundamental building block of music and it’s going to be structured in a way that everyone will understand how to study and how to actually use it in any musical environment.

Finally, if you could only listen to one artist/band etc for the rest of your life, who's it going to be?

This is an easy one! Myself!